So on New Years Eve we decided to do a little day trip to go see the seals! I was in heaven and just wanted to cuddle them they are so adorable! At Horsey Gap you are allowed to go onto the beach with the seals. 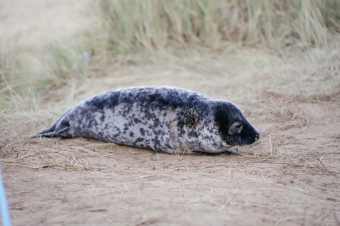 We did not do that. We stayed up on the dune behind the rope. It was cold and windy and with our two year old we just found It best to stay right there and not walk down too far. But this little guy was right at the rope! He was just looking at everyone lifting up his front little hand like he was waving. But of course, since he was RIGHT there so was everyone. So I got the few snaps I got out of the way.  I did get a few snaps on some down on the beach and after told my husband I needed bigger lens! HAHA!

If you decide to go to Horsey to see the seals here’s some info for you. You see more of them during the winter. They start Mohave their pups late October / early November and can carry on to early February. PLEASE think of the seals! By that I mean this is their HOME. Their ENVIRONMENT. DO NOT DISTURB THEM. Let them be. Be mindful of them and just don’t approach them, don’t cause separation between the mothers and pups. Just stand back from a good distance to where they can observe you and you the same for them and just take in them being in their natural environment like they are meant to be.

Welcome to our adventure, travel, + lifestyle blog! This is a collection of where we want to go and where we've been! Follow along to get travel ideas on what you would like to see that you maybe didn't know about. If you do follow along, enjoy!

Like want you see and want to see new blog post as soon as they are up?